The UUA has made its final report, as called for in our resolution. And they presented a 5-minute video to the General Session.

After his report, Treasurer Tim Brennan thanked me for giving them a “kick in the pants.” We called on the UUA to do the right thing, and they did it.  Again, it’s time to celebrate our work!

Having just reviewed my previous posts on this site, I see that we had over a dozen ideas of how to continue our actions, as leaders of the fossil fuel divestment movement within Unitarian Universalism.  We – Wes Ernsberger, that is – followed through on one of them – keeping this site up to date. Thank you, Wes.

This will probably be my last post to this group.  But before I go, I want to echo Rev. Peggy Clarke’s words, ” I am pushing for full-throttled UU participation in the Global Climate Strike on 9-20. I’m hoping to get it on the UUA agenda . . . and on the minds and lips of every minister the Sunday before. I hope you will all consider supporting and participating in the strike as well.”

I close with words from this year’s Service of the Living Tradition, quoted by Tim Brennan at the end of his presentation:

“I remember overhearing a caller to a radio show who asked the presenter what they could do, as one individual, to make a difference in the global climate crisis. I loved the respondents answer. The one thing you can do, is to stop being an individual. You have to join and work with others.” — Rev. Lindi Ramsden, Service of the Living Tradition June 20, 2019

That’s what this divestment work was about.  We worked together, and we helped make a reputational difference to the fossil fuel industry.  Celebrate!

Where is the UU Divestment Movement?

Having passed our resolution, we have been so quiet on our list lately.  (My main excuse is that it’s been summer gardening and harvest/preservation time).

Now we’re in our implementation phase, and some of us might want and be able to return to action.

Is there action on the home front (your congregation) or in your district or region that you can tell us about?  Or are there other congregations to add to our list of divesting congregations?  Please do tell!  We love to hear bragging when it comes to UU divestment.

I thought about specifying districts or regions in this query, but, given that they are entities of the UUA, I’m assuming that they are taken care of by the resolution we passed at General Assembly.

Where do we go from here?

I’ve been collecting ideas that have been submitted to the list.  What I’ve come up with is below; please let me know if I omitted anything.

Did I leave an idea out?  What is it?

Shall we narrow down the list?  Shall those of us who are interested volunteer for these actions, depending on interest and qualifications?  Does anyone think we should do a conference call?

Thanks so much to everyone who helped make this happen.  Here’s a collage that my partner, Gerri Wiley, put together of pictures she took at GA. 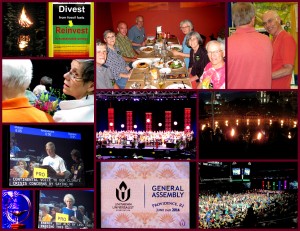 Spring is finally here, and we’re hoping that it’s true that April Showers bring May flowers.  And Sunshine.  And warmer temperatures.

But even if that doesn’t happen, we have positive news to share:  On April 13, the UUA Board of Trustees passed the following motion:

Recognizing the growing threat of climate change to the earth and to current and future generations, the Board of Trustees believes we must redouble our efforts to press for action to address the crisis through our invested assets.  We should use all of the tools available to us, including shareholder advocacy and divestment of shares in companies doing the greatest harm.  Therefore we support the passage of the Business Resolution calling for divestment of fossil fuel company stocks and engagement with the companies whose shares we hold.  Further, we applaud the Investment Committee and Socially Responsible Investing Committee for their work in carrying out the 2006 Statement of Conscience “Threat of Global Warming/Climate Change” which says:  “We call upon our denominational leaders to provide sustainable investing, by exploring the potential for using the ownership rights of the denomination’s financial resources to positively address the global warming/climate change crisis.”

In addition, the Board charges the team of Julian Sharp, Larry Ladd and Donna Harrison with crafting the Board statement supporting the proposed business resolution.  This statement should make clear that The Board supports the resolution as written.  To the extent that changes are proposed during the mini-assembly process, the Board will support those changes only if they are agreed to by the same parties who crafted and agreed to the proposed resolution.

We hope this means that at General Assembly (GA), we will have little to no problem passing the Fossil Fuel Divestment Resolution that we worked so hard to prepare, negotiate, and petition to put on the agenda.

Nevertheless, a campaign team is preparing for GA:

We are anxiously awaiting publication of the GA schedule, which will happen in May.  The time that the resolution will be voted on may well impact the plans we make.

Meanwhile, remember the words of Desmond Tutu:  “People of conscience need to break their ties with corporations financing the injustice of climate change . . . It makes no sense to invest in companies that undermine our future.”

Good news!  The Fossil Fuel Divestment Resolution will be put on the agenda
for General Assembly.

We had thought there might be a congregational poll to determine if the
majority of congregations voting wanted it on the agenda, but the Board of
Trustees decided that it was not necessary.

It’s now time to begin our campaign to pass the resolution.  I believe that
with adequate education, the resolution will pass overwhelmingly, just as
the Action of Immediate Witness did last year.  Given my experience last
year, I can predict some frequent objections from those who are
inadequately informed about the resolution.

– But I want shareholder activism; we have to stay engaged! (Answer: The
Resolution allows for it).
– But I want returns on our congregation’s endowment to be maximized!
(Answer: Talk about stranded assets/carbon bubble)
– I think this is something government should do.  (Answer:  Agreed.
But government is too dysfunctional presently, and we’ve got to get the
action going.  In addition, our legislators have mostly all been bought out
by Big Oil or Big Coal.)

Who will be on a campaign steering committee for our resolution?  Who are
the good strategists among us?  Who is familiar with a lot of UUA
publications or ways to reach UUs, especially those who are likely to
attend GA in Providence?   Who is in a position to have an open discussion
with a board member or members, i.e., someone known to a person or people
on the board either personally or by reputation?

Please volunteer (nominate yourself) or nominate someone else, after having
checked with them that they’re willing to serve.  I expect our work could
be intense for the next few months.  I’d set up a new Yahoo group for the
steering committee, and we’d probably have frequent conference calls to see
check in.

Let’s get busy getting the word out about why our resolution is good and
worth voting for.

Please send me your nominations.